Many will recognise this line from the lyrics of the song "Concrete Jungle", by Bob Marley and The Wailers, from their 1973 album Catch a Fire. From time to time, I am reminded of these words when engaging with people who have grown up under totalitarianism, be it Islam, Apartheid or Communism, or now, those growing up under Multiculturalism.

"When the Wall came down" entered our cultural lexicon on 9 November 1989 in reference to "The Fall of the Berlin Wall", itself an instant cultural reference. The next weekend I was there, joking with reservedly-bewildered East German border guards amid a constant stream of amazed East Berliners spilling through the gaps. "We come to look, just to look," said one man, in that particular "Ossi" accent I was by then well-familiar with. Many people said that. Formally, there were no longer any chains around their feet, but were they free? In the ensuing weeks and months, it was a question much debated on talk shows, around dinner tables and in seminar rooms, at least in the erstwhile West. Philosophy still had something going for it.

The point at which a Muslim leaves Islam to become a murtadd, apostate, is the point at which the wall comes down. The advantage that the murtadd has over the East German who came "just to look" is that the murtadd is not amazed at what he or she finds outside of Islam. Yet, that might be where the dissimilarity ends. Looking backwards across the scar on the landscape towards the rapidly-shrinking "socialist sixth of the world", the East German will have seen the familiar. The great revelation that would come after reunification with their free fellow-Germans on the other side of the "antifaschistischer Schutzwall", anti-fascist protection barrier, would be exactly how much information the Stasi secret police had collected on them and who would have been spying on them. Given that the DDR was a totalitarian police state, who knows how many of them would be looking at their own handiwork. Yet, East Germans knew that their social system was a con, whereas Muslims genuinely believe that Islam is a good thing.

I left Islam just as millions of Iranians woke up to find that Islam had landed on them. At first I saw only what was already familiar to me about Islam, which I knew more from the behaviour of Muslims, than from the Islamic teachings. The "mad mullahs", as the then still-reliable media described the Iranian leadership, were wonderful for concentrating the mind. Most ex-Muslims, it seems, were quicker off the mark than me in seeing the iniquities of Islam. Even so, all ex-Muslims looking back towards Islam find that their worst discoveries still lie ahead of them. I expect that with me, that was even more the case than with most.

This anger mounted as I came to understand Islam as a totalitarian system, and how the Muslims mind was locked into it. The anger reached its height not with seeing the barbarism of ISIS, which is known from all over Islamic history, but with realising how Islam is maintained: like an ant colony, Islam breeds a few for control and the rest for obedience. It was many years after leaving Islam before I understood the depth of evil that drives what Muslims refer to as the "scholars", and the comprehensiveness of idiotic despair that keeps the Muslim attached to Islam. Only over the last year or two, forty years after leaving Islam, and understanding how the Muslim is complicit in his or her, especially her, own self-negation, did my anger start abating. I am more determined than ever that this religion must be done away with.

Freedom means very little when the chains are removed and the one now liberated remains rooted to the spot, unable even to conceive of going anywhere. Moving off, in whichever direction, under one's own steam, of course implies freedom. But is it really that simple? I think not. I would be the first to celebrate the breaking of chains, any chains, but especially chains that bind the mind. Breaking the chains of Islam from around my feet still left many chains of Islam around my mind.

To doubt is the first chain that an ex-Muslim must break before any other chains can be broken. It is not without reason that the first order of business for any sheikh, any "scholar" and any religious leader is to make absolutely sure that a Muslim never ever doubts Islam. Even to doubt, feel uncomfortable doubting and managing to "dispel Shaitan" is already too far. It means control on the Muslim's mind is not watertight. The ex-Muslim will find taboos that linger for years, for decades, pointing to deeper, more lasting damage that they came away from Islam with. The most obvious: not eating pork, not drinking alcohol, not having sex before marriage, are relatively easy to overcome — 'relatively' being the operative word. Taking that first bite of a bacon sandwich, especially in the presence of other ex-Muslims, is a right of passage for many. 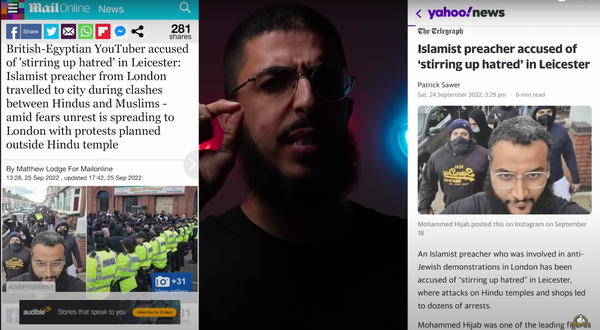 A white female reporter publicly rejecting him to his face when he demanded to be interviewed, together with Muslims chasing him away within the hour, could well have constituted the moment Mohamed Hijab was set on the road to dictatorship.

TO ALL MY JEWISH AND ISRAELI FRIENDS, COLLEAGUES AND READERS!

It is with sorrow that I share tidings of the passing away of Gershon Simcha Weiss on 1 September 2022. The Shofar shall sound by the life of his breath no more. Rest in Peace, dear friend.